A cabaret on the themes of isolation and loneliness, Archipelago brings together classic characters in poignant scenes of laughter and loss in a musical sphere that spans generations, cultures and landscapes. A classic, non-textual performance that entrances the eyes as much as it touches the heart.

"After the disappointment of The National Theater of Greece, TFM arrived in Chile - proceeded by excellent reviews and prestigious awards - was initially received with precaution. But, their show Archipelago has become an overnight sensation simply by word of mouth...The show entrances and invites many interpretations; ideal even for the whole family. The company's work is a lesson in honesty that will hopefully be heeded." - Las Ultimas Noticias

"TFM gives us humor and much, much more with their brief tales told only with gesture. Even though they are presented like a clown-cabaret performance, what this multi-national collective gives us is an attractive performance of pantomime within the context of fiercely independent art in a performance that is as old as theater itself." - Pedro Labra Herrera, El Mercurio

"Vaudevillian antics with a 21st century sense of humor, set to Fargo-esque cello music. In the best vignette, a hapless man ends up causing several awful but hilarious catastrophes just by trying to enjoy the view out of his window. Incredibly inventive staging and great comic timing." -Debra Auspitz, Philadelphia CityPaper 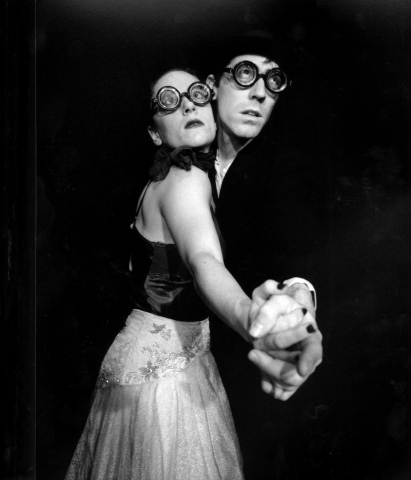 THE FLYING MACHINE
< previous next >